Back to CUSTOMER STORY
Case Study

For Ron Snow, broker/owner of RE/MAX Associates of Utah, building a future-proof business model is the only way to compete with the Goliaths of the world.

A pioneer in real estate automation and technology, Snow launched his career in the grocery industry, spending 11 years in the technology management department at Kroger. While he ultimately got into real estate as an investor, Snow has made it his mission to resolve the dysfunction associated with the buying and selling process for homeowners and investors alike.

“A lot of what I’m doing comes from the way in which we worked things in the grocery industry,” says Snow. In fact, it’s this under-one-roof mentality that drives every decision Snow makes as he works toward creating a tech-enabled, integrated brokerage.

“I’ve spent a lot of time building out a system to walk the consumer through the entire real estate journey while positioning the agent as the consumer’s point of entry,” says Snow.

As revenue streams grow thinner, brokers and agents need to engage clients across the full lifecycle in order to create broad, sustainable revenue streams. But a soundproof business model can only take you so far. And, according to Snow, it only works with the right technology.

“I found out very quickly that it was better for us to partner with the right technology company than try to be a technology company ourselves,” notes Snow, who explains that getting more heavily involved with Inside Real Estate over the last 18 months was the logical next step.

“We’d been working with Inside Real Estate for eight or nine years,” says Snow, who points to a shared vision as one of the main reasons behind the partnership.

“There are no limitations, and the platform was built to grow and evolve alongside my business,” explains Snow, who has leveraged kvCORE to not only help his top agents and teams expand their business, but to build upon the tech foundation with ancillary services for additional revenue streams.

According to Snow, since partnering with Inside Real Estate, he and his team have been able to exponentially grow their repeat and referral business.  As impressive, is the growth they have seen in highly profitable affiliated services revenue.  Between these and other improvements, Snow’s business has seen a massive 400% increase in profitability.  And importantly, this growth is not slowing down.

“We’re able to generate leads at a fraction of the cost using Inside Real Estate’s system and technology,” says Snow. “While we can throttle it up or down as much as we like, the biggest problem we’re running into is that we’re generating 10 times more leads than we saw previously - so much demand, in fact, that we’re reinventing our follow-up strategy.”

As the future continues to unfold, there’s a lot on the horizon for RE/MAX Associates and Inside Real Estate as they get ready to launch the first-ever end-to-end experience this fall on Inside Real Estate’s new homeownership platform, CORE Home.

“Today’s consumer demands an experience with a single focal point, and that’s exactly what we’ve built,” says Snow. Tightly integrated with kvCORE, the homeownership platform enables agents to deliver the seamless experience consumers demand, and keeps agents at the center of this process long-term.

Providing a superior, portal-grade consumer experience that spans the entire homeownership lifecycle, from buying and selling to moving to owning and then buying again, the homeownership platform allows consumers to track the entire lifecycle process in one place, keeping them informed and connected to everyone and everything they need during each phase of the process.

While there are others out there in a race vying for the homeownership consumer, Inside Real Estate has put the brokerage first, ensuring that this technology empowers the brokerage & agent brands vs a 3rd party brand. “This is what sets them apart, and why it will undoubtedly be successful, and why they have always been our long term tech partner,” says Snow.

“If you’re not running this type of system with the technology and support to back it up, you’re not going to be around to see what the future holds,” concludes Snow. 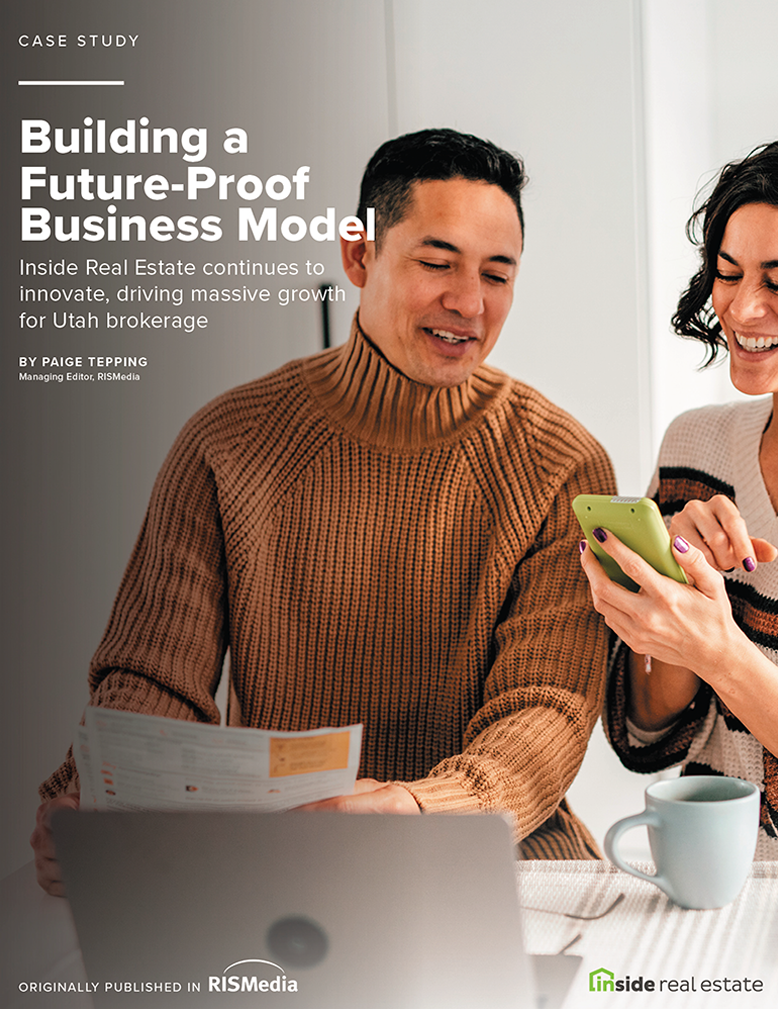 For Ron Snow, broker/owner of RE/MAX Associates of Utah, building a future-proof business model is the only way to compete with the Goliaths of the world.